Do you offer a Waste Oil Evacuation Pump Kit?

Each kit comes with:

How do I place an order with SAMSON Corporation?

What is the price and availability of a SAMSON product?

Please contact our customer service department for price and availability of products. You   may email enquiries to orders@samsoncorporation.com or call us toll free at 1-800-311-1047.

How can I track my SAMSON Order?

Our customer service department will be more than happy to track your order or update you on your order status.

Which SAMSON pump is right for me?

SAMSON carries a wide variety of pumps and accessories.  To find the pump that fits your specific need, please contact Samson sales representative in your area.  They will be able to best determine what you will need.

My pump does not work!

If your pump is not working properly, it could be for various reasons.  The best way to determine the problem is to speak to one of our customer service representatives directly.  They will be able to help you resolve your issue or put you in contact with our technical service department for a more in-depth answer. You may call us at 828-686-8511 or toll free at 1-800-311-1047

My meter is out of calibration!

Probably not. The Samson meter is more accurate than the reflexes in a human hand – it divides every single quart into 310 units of individually measured teeny tiny parts – try to stop it at precisely 5.00 Quarts, and you’ll agree. So, while we advertise the meter as accurate + or – a half of a percent, it is actually measuring down to a third of a percent – about a tenth of an ounce of oil.

So why is this the most Frequently Asked Question? We’ve tracked down several answers you might consider.

The dipstick can only serve as a general guide and could have an error anywhere from 5% or so on up. If you are judging the accuracy of the meter by the dipstick you might find a meter that is likely broken and wildly out of calibration, but you certainly can’t use a dipstick evaluation to calibrate the meter.

While the meter cannot create any air bubbles in the oil, it will certainly measure them. When air is mixed in with the oil, the actual amount of oil is less that what is indicated on the meter. There is a suction leak at the pump that needs to be repaired, or possibly air was not bled out of the piping after the tank was run dry.

Someone gets a new meter and discovers the amount of oil they were used to dispensing in a particular vehicle is different than the amount shown on the new meter. Maybe they overfill a crankcase by a quart or something like that. This can happen when the old meter is worn and inaccurate, and the new meter is, well – new and accurate.

This happens a lot. Someone gets a leftover five quart (or even worse, a one quart) commercially packaged oil jug with the clear stripe markings on the side. Castrol, Mobil, the brand does not matter. The issue with these jugs is that they are not accurately marked, at least not in the league of the accuracy of the gun (a tenth of an ounce of oil) but even more importantly they are too flexible to give an accurate reading. Go ahead, squeeze it and you’ll see – maybe it has a little dent in the bottom corner – maybe there’s a few ounces left over in the bottom – you get the idea.

It used to be right on, but it’s drifted out of calibration:

There is a screen inside the swivel of the gun where it attaches to the hose. If this screen gets clogged it impedes the flow of oil and can affect the accuracy.

So, you’ve eliminated all of the possibilities except that the gun is not broken and is definitely in need of calibration. First, get your Service Manual that was shipped with the gun. I’m kidding, I know you threw it away, just like I would. You can get a copy on the Samson Website. Read the instructions, it is pretty simple, since the gun does all the math for you.

What you really need is a certified one gallon measure, or even better a certified five gallon measure if you really want to take advantage of the built in accuracy of the gun, but those are really expensive. The Samson 2377 five quart jug has proven over the years to be very accurate, and it has hard sides so the volume won’t vary if you squeeze it. Before you start calibrating, go ahead and dispense five quarts into the jug and look it over. Look in the top. Are there air bubbles? Fix the pump or bleed the system if you find any air bubbles at all. Set the jug on a *perfectly* level surface. Does it show five quarts? If it is at the five quart line, or touching it above or below the line you should probably stop, you are not going to be able to manually calibrate the gun any better than it is already calibrated. If it is off and needs calibration, it will be off by more than one eighth of an inch above or below the line.

Finally, if you are convinced the gun needs calibration, go ahead.

Shop Samson will provide you with communications about new products, promotions and other corporate news, in addition to ordering Samson products 24/7 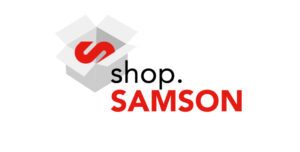 Shop.Samsoncorporation.com will provide you with communications about new products, promotions,
and other corporate news, in addition to ordering Samson products 24/7